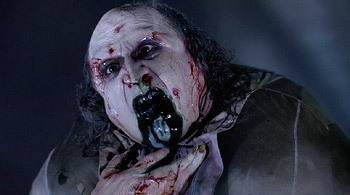 "Ah... shit... I picked a cute one... the heat's getting to me..."
"There's always one zombie with black gunk coming out of his mouth. See? There he is. What is that black gunk? I don't know! No one knows! It's one of the great mysteries of unlife!"
— Minmax, Goblins
Advertisement:

Maybe you're infected by a zombie virus. Perhaps an alien's made a home in your intestines. Or that demon you were trying to summon got a little too close for comfort. Either way, one of the symptoms is Bad Black Barf.

Black Barf, as the name implies, takes the form of a thick black goo that issues from the victim's mouth, which they will cough up frequently in varying amounts. Sometimes it may ooze out from the nose, ears, or even the eyes (or some other, less savory orifices). Color might vary slightly, from dark brown to burgundy, but it's mostly black. In some cases the stuff might even be acidic, poisonous, or just smell really bad.

Besides the obvious gross-out factor of seeing someone puking, the human body doesn't really produce black-colored fluids (aside perhaps from fecal matter under the right combination of dietary and gastrointestinal circumstances), and there are very, very few diseases that cause black discharge of any kind, so combining the two informs the audience that anyone with Bad Black Barf is not just sick, but sick with some unearthly, unholy, or just downright unnatural disease.