Visual Novel / We Know the Devil 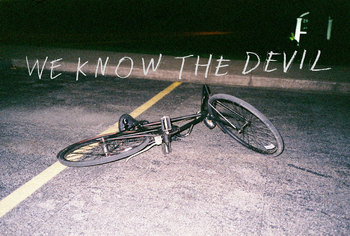 Anyone can kill the devil; that’s why they always make teens the vampire slayers, the magical girls. But some kids can’t even get that right; and that’s why meangirl Neptune, tomboy Jupiter, and shy shy Venus have to endure one more week of summer camp and each other, singing boring songs about jesus, doing busywork for adults, and hoping god’s radio can’t hear them.
Before they can leave the summer scouts, they’ve got to spend twelve hours in the loneliest cabin in the woods and wait for the devil to come and live through the night—or not. You know.
Advertisement:

We Know the Devil is a Visual Novel created by Aevee Bee and artist Mia Schwartz, with a soundtrack

by Alec Lambert, and aesthetic touches and UI by Lulu Blue.

We Know the Devil has no one true protagonist, but someone will always be left out, and it’s up to you to decide who that is. Instead of choosing a partner, you follow pairs of characters as they learn about themselves and wait for the devil to appear.

Will Venus and Neptune stop hating themselves long enough to be friends? Will Jupiter finally tell Neptune what’s been on her mind? Will Venus and Jupiter make it to morning as the only good kids left alive? Hopefully it turns out the way you want it to. Don’t forget: the price the two pay will be the third.

The game is available on Date Nighto

. A Self-Contained Demo (taking place before the main game) is available here

Heaven Will Be Mine is a Non-Linear Sequel by the same creators, but with a new cast and setting, and focusing on the experiences of queer young adults instead of teenagers. It released on July 25, 2018.

Due to the short nature of the work, and the significance of plot revelations, all spoilers have been left unmarked.