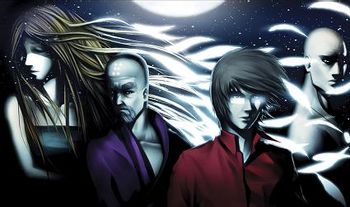 (from left) Shandala, Kamimura, Raimi, and Oran.
"What would you give to know the truth?"
—Tagline
Advertisement:

Broken Saints (2001-2003) is an original web animation series in twenty-four chapters. It was created over the course of two years by writer Brooke Burgess, artist Andrew West, and programmer/Flash wiz Ian Kirby, featuring music composed by Burgess' cousin Tobias Tinker. The format is a hybrid of comic and animation formats, and is referred to by Burgess frequently as "cinematic literature". As in comics, characters remain mostly in static poses and dialogue is depicted in speech balloons, but there are a number of times when movement is used within 'panels', and the series frequently uses background music and sound effects to add to the overall cinematic effect.

The story focuses on four strangers from "the quiet corners of the globe", each from a wildly-different background and worldview than the others, who all receive similar traumatizing visions of impending doom and are drawn to the same place in search of answers. Along the way, they face their inner demons and learn about The Power of Love.

The story is told in twenty-four chapters, with many chapters frequently sub-divided into multiple acts. The total running time for the series is ten and a half hours. The series was released on DVD with added voiceovers, plus bonus features and commentaries, by 20th Century Fox in 2006. Among the voice cast are Janyse Jaud, Kirby Morrow, Michael Dobson, David Kaye, and Scott McNeil.

Brooke Burgess has stated frequently that some of his biggest influences in the conception of Broken Saints were David Lynch (specifically Twin Peaks), Terry Gilliam, The Prisoner, and Watchmen, all of which are referenced frequently over the course of the series.

The series in its entirety can be viewed here

Best not to look at the spoilers here. Most of them relate to the last few chapters.