Web Animation / Brawl of the Objects 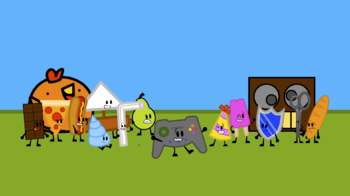 Brawl of the Objects is a short-lived Canadian Object Show created by Antony Kos (also known as Anko6theanimator) released in January 1, 2013 where 15 Animate Inanimate Objects are fighting for the "Grand Prize". The show is hosted by a video controller called Controlly. The final episode, "How It All Ended", was released on September 1, 2018.

Once, the creator of the show, Anko6theAnimator, was revealed to be diagnosed with cancer on his DeviantArt account, thus being unable to animate BOTO as normally as he did before. Luckily, he then announced that he was completely cured of Burkitt's lymphoma, the cancer he was diagnosed with, and was sent home in May 5, 2016. He could now draw and animate like how he used to be, and hopefully that included the revival of BOTO, after its two years of inactivity. However, only two more episodes were made. It is currently going to receive a Dénouement Episode. All episodes can be viewed on the official playlist

If you were looking for the lore of Brawl of the Objects, then look no further. There's The Rook Explanation Video.