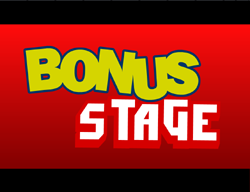 "Three friends become the guinea pig of a brilliant inventor. The goal: to create the greatest webtoon of all time! They failed. Now witness the failure! BONUS STAGE!"
Advertisement:

The cartoon was focused on Joel Dawson, action scientist, and his roommate Phil Argus, a normal person with superpowers who is mostly frustrated and serious. There's Elly Strife, who has a crush on Joel that goes unrequited, aside from Phil's crush on her. Rya Botkins is a robot created by Joel to be Phil's girlfriend; she is a Deadpan Snarker who verbally (and literally) rips people (mostly Phil) apart, and is not really Phil's girlfriend. Finally, Phil's mom, Jessica Argus, is middle-aged, but acts and looks like a 25-year-old babe who just wants to fit in with the crew.

All this started with High Score, the original show before Bonus Stage, which got started as an attempt to compete with Homestar Runner. The cartoon only lasted 4 episodes and was canceled due to lack of interest from the creator.

Bonus Stage was created by Matt Wilson. Matt hated some of their fans, because they did not think or behave like normal rational human beings and none of them were ever satisfied with anything that Matt did, making it impossible to adjust the writing. Regardless, their fans loved them anyway.

Matt also did nearly all the voices on the show and used FL Studio to create the background music and theme song. They used Swift3D for CGI.

Bonus Stage ended in 2006 from financial issues and lack of interest from Matt Wilson. After years of waning interest and financial woes, Matt made the decision to end the series abruptly mid-arc with a Downer Ending. The site itself went down in 2009, so the show can now be found here

(it will be necessary to constantly edit your URLS in the keenspot subdomain due to flash menus).

Matt has since started a new channel, Cartoon Drive Thru, which features much of the same kind of humor.