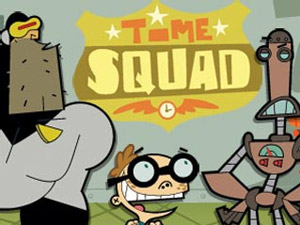 Setting right what once went wrong ...or will have gone wrong.
Larry 3000: Hello, we're the Time Squad. Our mission is simple:
to enforce the past to protect our future.
Buck: And making history fun!
Otto: You mean making fun of history! (Larry smacks him) OOW!
Larry 3000: Quiet, Otto!
— A Cartoon Network promo for the show
Advertisement:

Imagine that as time continues into the future, the past starts to unravel, with various points in history coming out all wrong: Abraham Lincoln leaves his presidency to pull pranks, Eli Whitney invents flesh-eating robots instead of the cotton gin, Winston Churchill becomes a nudist, Ludwig van Beethoven becomes a professional wrestler, Edgar Allan Poe writes cheerful children's stories, Amelia Earhart is too afraid of germs to become the first female pilot, Al Capone uses circus clowns to run his crime syndicate, and so on.

Enter the Time Squad, who travel through time making sure that the past stays right on track. The show follows one section of Time Squad: Buck Tuddrussel, who likes to shoot first and forget the questions, Larry 3000, an uppity, effeminate, snarky robot who originally worked with kings, senators, and diplomats, and Otto, an orphaned history buff from the 21st century picked up along the way who assists with his knowledge of the past. "Enforcing the past to protect our future."

Unless you count Otto's exposition, this show doesn't even try to be historically accurate, In fact, the basic premise revolves around the inaccuracies. And yet, most of their "successes" often leave behind many more inaccuracies...

The show was created by Dave Wasson and premiered on Cartoon Network in June 2001 and was canceled in November 2003. It reran for a time between November 2003 and August 2005 in the US, but since then, the show has all but disappeared from the airwaves. Cartoon Network did air clips of select episodes on their website as part of the channel's 20th birthday in October 2012, but that was a "limited time only" deal. Cartoon Network had added the first episode to their app and website in April 2020 to promote the HBO Max service but it was never confirmed to be included on the service and Cartoon Network removed the episode only a couple weeks later. Fans are waiting to see if WarnerMedia will add the entire show to the service.

per The Wiki Rule.