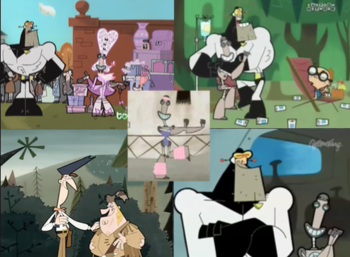 Time Squad has numerous examples of Ho Yay, most of which center on Buck Tuddrussel's Ambiguously Gay Robot Buddy the Larry 3000, as seen in these examples below.

Before reading, it's worth mentioning that, unlike most other "children's" shows, the Ho Yay in Time Squad didn't necessarily follow the Rule of Funny every time. It did in the first few episodes, but after that, it became Larry's defining character trait. Here is a compiled list of examples that more obsessive fans have gathered for your enjoyment.

Season 1
Season 2
The most blatant example of Larry and Tuddrussel as a couple can be found in "Ex Marks the Spot," in which Buck and his ex-wife appear to have renewed feelings for each other, and Larry tries to sabotage their "relationship" in every manner possible. There's the ending line of the episode:

Larry: (to Buck): Don't touch me! Tonight, you're sleeping on the sofa!