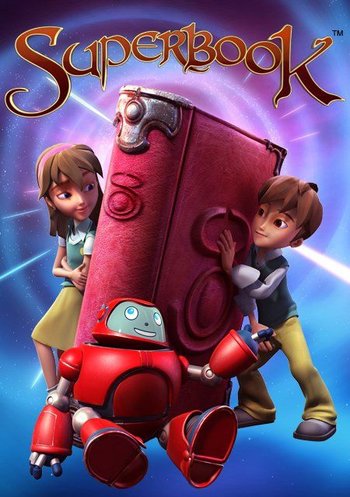 It's the Word for all time, the Word for all the world;
The Story That's Forever True!
It's the Word that shines, with light from above
That God in His Love gives to you!
So come take a ride, there are wonders to see;
Adventures inside, for you and for me!
His Word forever alive;
Superbook!
Hosanna, sing hosanna,
The Word—Superbook!
Hosanna, sing hosanna,
The Word—Superbook!
— Opening credits lyrics (full version)

Superbook is a 2011 computer-animated reboot of the 1981 Japanese-American animation series of the same name, produced by the Christian Broadcasting Network (which also developed the original series alongside TV Tokyo).

This series follows the adventures of Chris Quantum and his best friend Joy Pepper, along with their robotic companion Gizmo, as they experience various Bible stories and meet the characters therein by way of the eponymous Superbook (here a hand-held electronic device instead of a physical book like the original), which takes them back in time to the Biblical eras in order to teach them important lessons that relate to problems they are facing in the modern day. Like its predecessor series, this show stays largely faithful to the original Bible stories, although it doesn't shy away from some of the stories' darker and more violent aspects (it's not afraid to show shepherd boy David killing a lion or the scars from Jesus' beatings prior to the crucifixion, for instance) even as it keeps the material appropriate for children.

As noted on the predecessor series' page, the remake was the first animated series to air on Freeform since 2005 (that network also aired the original show in the 1980s), although it's most often broadcast on The 700 Club telethons and simultaneously uploaded online by the official YouTube channel. This series has also been shown in Japan as of 2018, bringing the franchise full circle.