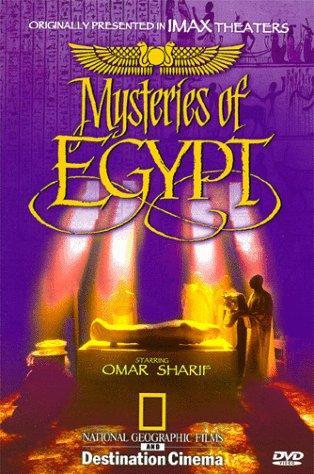 Mysteries of Egypt is a 1998 IMAX Movie, directed by Bruce Neibaur. The film is mostly a documentary with a Framing Device, only 39 minutes in length. The main stars were Omar Sharif and Kate Maberly.

The film begins with an unseen Narrator mentioning the "wonders" of Egypt. The camera gives a spectacular overview of the Egyptian landscape. Then the scene shifts to a funeral, that of a Pharaoh. The narrator explains that his death was sudden and mysterious, that this Pharaoh died young. Once the funeral scene ends, the narrator finally names this Pharaoh: Tutankhamun (18th dynasty, reigned c. 1333-1323 BCE). The scene shifts to the area just outside the grave. Millennia pass and one man approaches: Howard Carter (1874-1939). The narrator explains that Carter spend years searching the Valley of the Kings, returning empty-handed many times. A scene detailing his activities follows.

Then the setting shifts to a city of modern Egypt. We finally meet our narrator, an Egyptian grandfather (Sharif) who tells the tale to his teenaged granddaughter (Maberly). He lives in Egypt, while she is just visiting the country. But the girl asks him about the Curse of Tutankhamun, which she has heard so much about. Grandpa is rather annoyed that she ignores the Pharaohs, the tombs, the monuments, and the great civilization. All in favor of the Mummy's Curse. He promises to tell her about the curse later. First they have to take a trip together.

The next scene takes the viewers on a trip down the Nile, complete with a map super-imposed over the beautiful photography of the flight. Grandpa explains the importance of the Nile to Egyptian civilization and how they relied on it for their continued survival. The film continues to shift between a number of parallel "storylines".

The film was a minor box office hit. Its worldwide gross is estimated to 44,703,731 dollars. About 40 million of these dollars came from the United States market, where it was the 50th most successful film of its year. Reviews were mostly positive, focusing on its visual appeal and its use as a basic introduction to the "rich tapestry of history". The film ,as reviewer Herb Lash put it,: "strikes an engaging balance between travelogue, documentary and storytelling". There is some criticism about never going in-depth about any particular subject. Though this arguably results from its brevity.