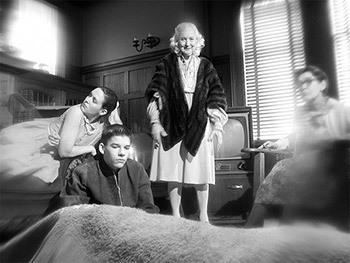 My Winnipeg is a 2007 film written and directed by Guy Maddin.

Guy Maddin, an avant-garde filmmaker well-known for Le Film Artistique, was commissioned by the Documentary Channel of Canada to make a documentary about his hometown, the city of Winnipeg

, capital of Manitoba. Maddin instead turned in something much weirder.

The film as it is features a fictional "Guy Maddin" who longs to escape his boring, dreary hometown, a gray and cold city that sits on the flat prarie of central North America. Maddin—actually "Maddin", played by an actor named Darcy Fehr, although the real Guy Maddin narrates—muses about how Winnipeg is sleepy and boring but no one ever manages to leave. He reels off facts about the town that are mostly nonsense, like how horses stampeded into the Red River one winter and died, or the supposedly ancient tradition in which the people of Winnipeg had an annual treasure hunt, the prize of which was a one-way train ticket out of town. Sprinkled in among the nonsense are some actual historical facts, like the 1919 Winnipeg general strike and a simulated Nazi invasion of the town in 1942.

Meanwhile, "Guy Maddin" rents out his old childhood home and hires actors to play his mother and siblings. Together they act out his (fake) childhood memories. (His mother is played by Ann Savage, B-movie queen of films like Detour, in her final role.) Maddin wonders if he will ever manage to leave Winnipeg.