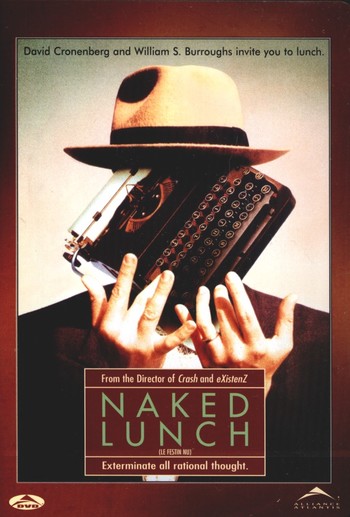 David Cronenberg released a 1991 film adaptation of Naked Lunch that used very little of the book's material, claiming a literal adaption would be not only impossible, but "banned in every country in the world".

Instead, he creates a heavily fictionalized biopic about author William S. Burroughs, in which Burroughs' long time avatar, William Lee (Peter Weller), is working as an exterminator and gets high off his bug powder. He later flees to Interzone after the now-legendary shooting of his wife, Joan Vollmer, where he becomes tangled in a world of surreal espionage, through contact with several giant bug-shaped, alien typewriters who talk out of their asses. You read that right. It's a really weird movie.