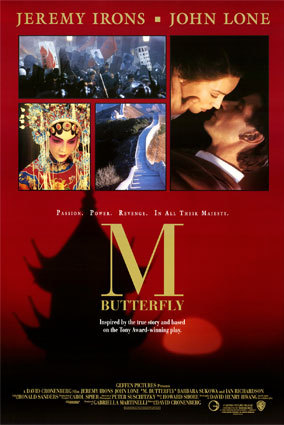 "I could escape this feeling
With my China girl..."
— The opening quote of the script, "China Girl" by David Bowie and Iggy Pop
Advertisement:

M. Butterfly is a play written by David Henry Hwang in the late 1980s.

It is a very loose re-telling of perhaps one of the most strange (and true) cases of mistaken identity this side of 1900. A French diplomat named René Gallimard works in China during the '60s as an advisor to the goings-on of the day where he meets and becomes enamoured with a Beijing Opera diva named Song Liling. The two hit it off, and Gallimard cheats on his wife with Song for the next twenty years, in which his relationship with Song has ups and downs such as the cultural revolution in China, the Vietnam War, an unexpected pregnancy on Song's part, and Gallimard falling out of power in China only to regain some of his power as a spy for China by handling very sensitive documents out of France.

Naturally, they are eventually found out, arrested, and put on trial and it is in this trial that Rene learns the hard way that there are no women in the Beijing Opera.

A wonderful play that discusses the nature of gender and Asian stereotypes, this play is a very well-done dark comedy that ends in a way worthy of the Puccini opera the play gets its name from.

In the early '90s, it was made into a film by David Cronenberg, starring Jeremy Irons as Gallimard and John Lone as Song.

Not to be confused with Madame Butterfly.

This film adaptation provides examples of: