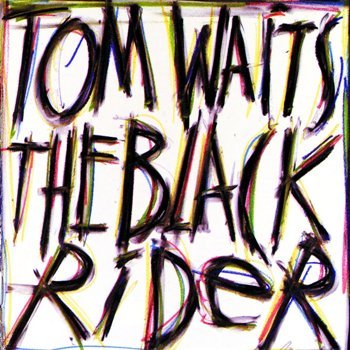 Come on along with the Black Rider. We'll have a gay old time!
Advertisement:

The Black Rider is a 1993 album by Tom Waits, based on the stage play/musical "The Black Rider: The Casting of the Magic Bullets", written by William S. Burroughs in 1990 and directed by Robert Wilson for the Thalia Theater in Hamburg. For this Waits wrote the lyrics and music.

The play is an adaptation of the "folk tale" Der Freischütz from the 1810 German anthology Das Gespensterbuch ("The Book of Spectres") by August Apel and Friedrich Laun, which was translated into English by Thomas de Quincey in 1823 under the title The Fatal Marksman. Two years before that, in 1821, it was already adapted into the opera Der Freischütz by Carl Maria von Weber and Friedrich Kind with changed names and a happy ending.

The Black Rider, which sticks closer to the 1810 story, tells how a file clerk, Wilhelm (Max in the opera), wants to marry Kätchen (Agathe in the opera), the daughter of a forester. In order to gain her hand in marriage he must prove that he is a good hunter and marksman, which he isn't. To improve his talents he strikes a Deal with the Devil, Pegleg, who offers him magic bullets that never miss their target. At first everything goes smooth. Wilhelm impresses his soon to be father-in-law and the marriage goes on as planned. However, on the wedding day Wilhelm accidentally shoots his wife dead. He goes insane and the Pegleg carries him and his soul off to hell. People familiar with William S. Burroughs' own lifestory will notice the parallel with his own accidental shooting of his wife in a drunken attempt to go William Telling with her.

The 1993 album is not a Cult Soundtrack in the sense that the music from the play is performed with different arrangements.