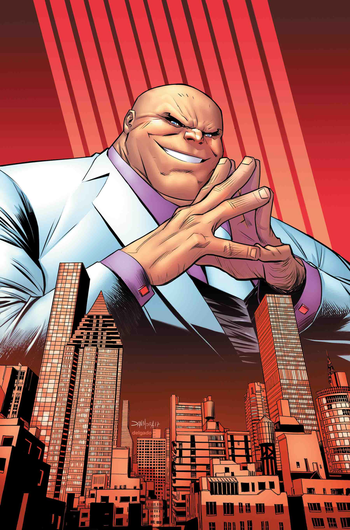 "That's why I'm the Kingpin."
"He is the Napoleon of crime, Watson. He is the organizer of half that is evil and of nearly all that is undetected in this great city."
— Sherlock Holmes, on Professor Moriarty
Advertisement:

The criminal version of the Evil Overlord. Standing out from the terrorists, smugglers, murderers, gangsters, evil dictators, and other petty criminals is the diabolical mastermind. Generally found sitting in an expensive leather chair with one hand idly tapping a Trap Door button and the other stroking his pet cat (or dog), the diabolical mastermind is always at the top of whatever criminal food chain the hero — usually a detective or spy — ends up climbing. He differs from the Evil Overlord in that he (usually) has no sovereign territory or political power of his own, although his criminal resources sometimes rival those of a developed nation.

Because of this, he (and it is almost always a he) is generally protected by dozens of mooks and sometimes The Dragon. As such, he is very rarely made to pay for his crimes.

The diabolical mastermind's motto is that you have to spend money to make money. As such, he may spend countless millions—or billions—of dollars building a super orbital Death Ray operated from a secret volcano base, only to then hold the world's governments to ransom for even more money. Since money is no object, the best way to ask the world for this ransom is to take over every TV channel or network in the world.

Note that the diabolical mastermind is not always motivated by money. He may lust for power, land, priceless art, or something else. But his tactics are invariably complicated and technologically impressive.

Typically, the diabolical mastermind holds no political affiliation, nor does he follow anyone else's orders. As far as he is concerned, his is the only opinion that matters and everyone else will follow his lead. He fights for no cause except his own. Any affiliations with political parties or rebel fighters are purely for the purposes of hiding his connections with crimes or having others do his dirty work. This is not to say he has no political views or agenda, just that they are either kept separate from — or are the same as — his own personal ambitions.

Of course, the diabolical mastermind isn't upset about getting his hands dirty if needed, although if he manages to capture the hero, he inevitably makes the mistake of pulling The Blofeld Ploy or favouring a deathtrap rather than just shooting the guy in the head. He is often a Bad Boss and his henchmen fear those ominous words: "You Have Failed Me for the last time..."

In politics, this character would resurface as the Shadow Dictator. The line between this character and a particularly powerful, competent Corrupt Corporate Executive is razor-thin, and in some cases nonexistent. Quite frequently is The Faceless ("next time, Gadget!") and a Badass Normal.