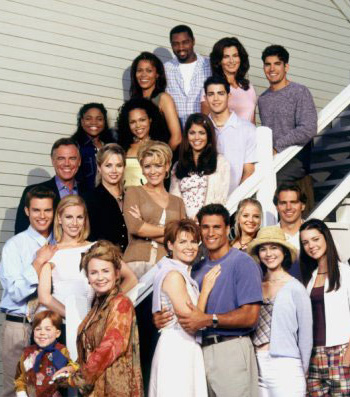 Main cast from left to right: Timmy, Tabitha,
And the Rest.
"Passions doesn't throw reality out of the window, so much as jettison it into the sun."
—Charlie Brooker, Screenwipe
Advertisement:

Passions, created by former Days of Our Lives head writer James E. Reilly and airing on NBC from 1999–2008, is quite possibly the weirdest-ever daytime Soap Opera outside of Dark Shadows.

The show ostensibly follows the lives of numerous families in the small New England town of Harmony, including the eeeeevil Crane family, who orchestrated most of the non-magical plotlines; the Lopez-Fitzgeralds, many of whom fell in love with Crane family members; the Bennetts, who were connected to the Cranes through Alistair's grandson Ethan; the Russells, who have got to be one of the oddest Brother–Sister Incest stories on record; the Winthrops, who get involved in an impressive romantic three-way plot; the Hotchkiss family (involved with the Winthrops); and at least one member of the Standish family (related to the Bennetts).

The show opened as a fairly innocuous daytime soap, albeit with elements of the paranormal. That soon ended with the introduction of Tabitha the witch and her ambulatory doll Timmy. An episode of Passions makes the average telenovela look like The Wire. The "villains" belonged in a Silver Age comic book. The ruling dynasty was comprised of inbred idiots. A transgender Two-Face stalked Harmony for victims to rape/blackmail (the joke being that rapists and blackmailers are the two most common villains in soaps). Zombies, the Devil, and dwarves ran amok. Characters popped over to Magical Land of Oz for an afternoon... And, in one memorable arc, a faked death involved some serious stealth work.

Passions is, to date, the last new soap opera to premiere on American daytime television. It replaced the long-running Another World; when it premiered in 1999, there were eleven soaps on the air. Now there are four.