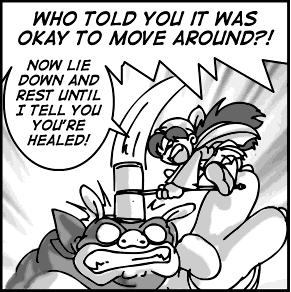 McCoy: I would like to remedy that situation.
Spock: If you believe I have acted irregularly, then relieve me of duty. That is your prerogative as medical officer of this ship.
— Star Trek: The Original Series
Advertisement:

You're The Leader, the Reasonable Authority Figure, The Captain, The Emperor! You rule a world, a galaxy, a dimension, multiple universes! Everyone obeys you! Even if you do have a cold, or a broken arm! So who is this man who dares to order you about? And act huffy when you don't obey in haste?

Well, he's your doctor. By which we mean, he is that kind of doctor. Unless, of course, he's the healer, the midwife, the nurse, The Medic, or any other member of the healing profession. And he is quite certain that you must obey the Doctor's Orders.

No matter what exalted position their patients hold, and what power the patient has over the doctor in non-medical matters, in their field of expertise, doctors are adamant that they are in charge. This does not mean that the patient will actually obey — even the Reasonable Authority Figure may defy him for reasons of state — but the doctor will regard it as being a bad patient, not their exercising rightful authority.

Can also apply when the figure gives orders about a third party, the doctor's patient.

Rule of Drama dictates it will be most often seen when the patient does not want to obey, as when a character chooses to Pull the I.V., brush aside the ineffectual medic stuttering "You Can Barely Stand!" and get back to business. Alternately, a doctor may invoke this trope in a less serious context, to order their friend to take some time off or enjoy themselves, or a character may invoke it to refuse permission to see the patient or the like. Occasionally it's used to explain something — like an absence — quickly and get on with the plot.

Not to be confused with the Star Trek novel Doctor's Orders, although the title is a pun on this trope.