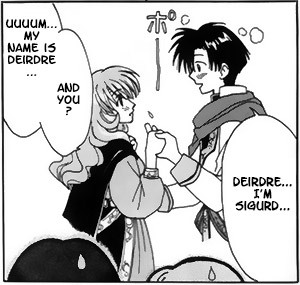 No prizes for guessing what comes of this.
"Girl meets boy, that's a safe beginning."
— Joe, Sunset Boulevard (The Musical)
Advertisement:

One of the oldest and most basic plots goes thus: boy meets girl, boy loses girl, boy regains girl. Details vary, but those are the major Narrative Beats.

For example, in Romeo and Juliet: boy (Romeo) meets girl (Juliet). Boy loses girl (due to infighting between their crazy families that ends up with two people dead and boy being banished). Boy finds girl again (in her tomb, so he kills himself, but it turns out she was Not Quite Dead and...you know what, you already know the ending).

In fact, there are so many examples of this trope (the massive quantities of romantic comedies, for instance) that this page is merely going to list interesting variations, subversions, and inversions.

Chic and Awe and Meet Cute are a subtropes of these. Not related to X Meets Y. See also Boy Meets Ghoul.