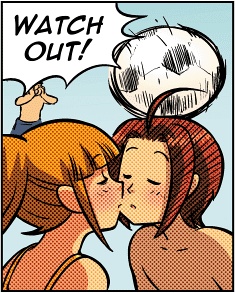 It just may be the cruelest, most frustrating thing a writer could ever pull. Two characters are finally about to bring all their shippers' dreams to fruition. They're about to resolve all the UST and cross the Just Friends line, at last. They're staring mesmerized into each others' eyes, inching forward ever so slowly, less than a millimeter away from lip-to-lip contact. This is it, the fans scream in their minds. They're finally going to kiss! And then...

Were they interrupted by a knock on the door or falling meteor? Did one of them remember the dead Temporary Love Interest they promised never to forget? Was the thought of a Relationship Upgrade suddenly just too scary? Well, for some reason, no doubt connected to Status Quo Is God, they can't or won't go through with it. They may be giggling afterwards, or they may be crying a river.

The sad thing is, the Almost Kiss says as much as a kiss, anyway, since we can see they both want it. But this way, the tension and dreams of shippers remain for the writers to continue to take advantage of.

Sometimes referred to as a "near-miss kiss".

In shows aimed at a younger audience where a kiss is a big deal, there is usually a big relationship-sealing kiss saved for the finale, preceded by several "almost" moments during the earlier episodes.

This is a genre standard in Bollywood films. Kissing in movies was censored in India and it is still seen as racy, so filmmakers perfected the art of showing the leads caressing with lips oh-so-close to each other. Unlike in other instances of this trope, an actual kiss (or more) is usually implied to have taken place.

A similar variant can be found in non-Indian media where the two non-kissers are of the same sex. The depiction of same-sex kisses was banned in the Western media industry until a few decades ago, and, while LGBT+ activism has challenged and often overpowered the stigma, an explicit kiss is still considered too spicy in genres targeted towards social conservatives (like Action Genre works). Unlike in the Bollywood variant, these scenes don't usually indicate a kiss has taken place, and tend to revolve more around Does This Remind You of Anything? imagery intended to create a charged, homoerotic atmosphere for those willing and able to see it. Because of this "deniability", it can be considered a form of Queerbaiting.

Example of:
The Tease