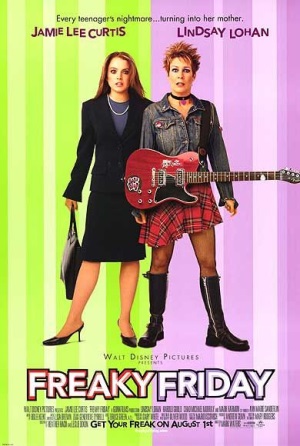 A journey soon begins, its prize reflected in another's eyes. When what you see is what you lack, then selfless love will change you back.
—The magic cookie's fortune
Advertisement:

Disney's second film adaptation of the children's novel Freaky Friday by Mary Rodgers, previously adapted as a theatrically-released feature film by the same author of the original book and released in 1976 and again in 1995 as a made-for-TV feature film, and released in 2003, stars Lindsay Lohannote In her first theatrical movie role since the 1998 version of The Parent Trap as Anna Coleman, an aspiring teenage guitarist who doesn't get along with her mother, widowed psychologist Tess (Jamie Lee Curtis)—to say the least. The day before Tess is supposed to remarry, she and Anna switch bodies after a Chinese restaurant owner's mother hands them some magic fortune cookies. Hilarity Ensues, with the now-young mother struggling to survive high school again, and the now-old daughter trying to cluelessly deal with psychiatric duties. It eventually transpires that they switched bodies in order to learn An Aesop about the value of family and friendship. Also has Chad Michael Murray, as Anna's crush, Jake, and Mark Harmon, as Tess' fiance, Ryan.

Tropes demonstrated in the film: