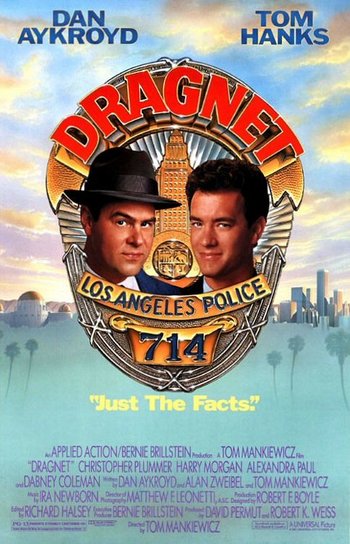 Dragnet is a 1987 buddy cop comedy film that serves as both an Affectionate Parody of and homage to the long-running television series of the same name. It was written and directed by Tom Mankiewicz and stars Dan Aykroyd and Tom Hanks. Although it's inspired by the franchise as a whole, it primarily apes the tropes of the 1960's revival series.

LAPD Sergeant Joe Friday, a Generation Xerox of his Uncle Joe from the series, is unhappily partnered with smart alec Pep Streebeck. Their contrasting personalities initially clash (it's like a rule or something), but they soon find common ground while investigating a cult calling itself P.A.G.A.N. (People Against Goodness And Normalcy), who plan to perform a ritual that will culminate in a Virgin Sacrifice. Between trying to protect Connie Swail (the aforementioned virgin, played by Alexandra Paul) and unmask the cultists, the duo become the only ones who can stop an even deadlier plot that puts all of Los Angeles at risk.

Note: There are actually three different movies named Dragnet, one made in 1954 during the original TV series run, one made in 1966 as a jump-start for the revival series, and the 1987 film as described above. This page is only for the 1987 film - since the other two films are closely entwined with their respective TV series, they should go on the Franchise page instead with the tropes specific to the series.