Film / Attack of the Killer Donuts 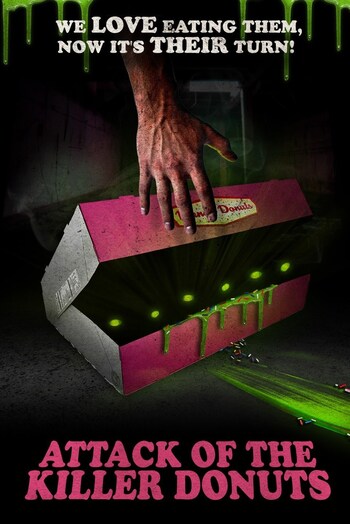 Attack Of The Killer Donuts is a Horror Comedy Movie by Scott Wheeler.

John Wentworth (Justin Ray) is an average young man in the town of Shady Grove who works at Dandy Donuts with his childhood friend Michelle Kester (Kayla Compton). He's currently in a relationship with a hot woman named Veronica (Leuren Compton (as Lauren Elise)), who is really just using him for money (to which he is completely clueless).

One day, his Uncle Luther (Michael Swan) comes into the store demanding the laptop, and gets into a tussle with John's boss Cliff (Chris De Christopher (as Chris DeChristopher)), and his new experimental animation serum lands in the deep fryer. As a result, the donuts that get fried in it start turning into murderous killer donuts.

That night, John, Michelle, and John's friend Howard (Ben Heyman) take notice of the donuts' new murderous tendencies, and realize they need to save Shady Grove from becoming snacks for the snacks.

Attack Of The Killer Donuts contains examples of: