Series / Wire in the Blood 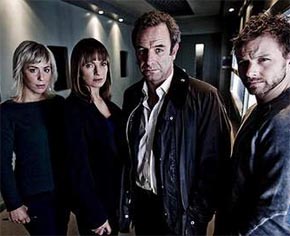 Wire in the Blood was a British crime thriller series, based on the ''Tony Hill'' novel series by Val McDermid, that ran for six seasons from 2002 to 2008 on ITV. The central character is an eccentric clinical psychologist named Tony Hill (played by Robson Green). Tony has such great insight into the minds of the criminals that he often seems sympathetic to them. He is able to mentally become the killer for the purposes of catching him.
Advertisement:

There is often tension between Tony and members of the police in the fictional town of Bradfield: Many don't trust his methods, others are put off by his manner. Sometimes Tony himself manages to get himself suspected of a major crime.

Tony is paired with DCI Carol Jordan in seasons 1-3, and Detective Alex Fielding in 4. Both women command the Major Incident Team and act as something of a foil to Tony's flights of deductive imagination. There is an ongoing low-boil romantic tension between him and both women.

The crimes in the show are high-level horror: The investigation of the killer's mental world is prolonged and exacting. The tortures, mutilations and murders are often viscerally sadistic and have a twisted sexual element. They are depicted with meticulous realism, yet depend on the imagination of the viewer to provide the worst elements.

The series was cancelled in 2009 due to ITV's financial troubles.