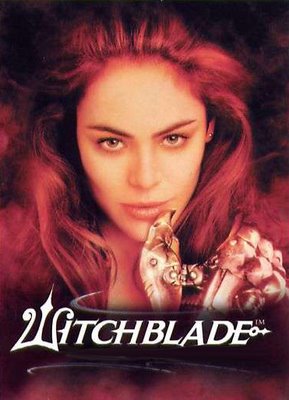 Not someone to take lightly.
Advertisement:

A 2000 live-action television series based on the comic book Witchblade, aired on TNT. The series contains a similar premise - New York Detective Sara Pezzini (Yancy Butler) is bonded to an Empathic Weapon called the Witchblade, which makes her of interest to Chessmaster Kenneth Irons (Anthony Cistaro), who seeks to control the Witchblade though he cannot wield it, and his Dragon, Ian Nottingham (Eric Etebari). However, the series tells more like a re-imagining of the concept rather than a retelling.

To the disappointment of some fans (and the delight of others), the Stripperiffic nature of the Witchblade was done away with, replacing it with a more traditional knight's armor.

The Witchblade itself is a supernatural weapon that can only be wielded by a woman. The reason given for this varies from character to character - Irons says it's because women are "more elemental" while Nottingham claims it is because women can better stand pain. It ends up on the wrist of Sara during a shootout at a museum where it was displayed, ultimately saving her life. From that point forward, it begins to show her visions of the past and, later, her dead partner, Danny Woo (Will Yun Lee).

But there are many people after the Witchblade and its wielder, and their intentions and motives are rarely good. Sara must learn to master the Witchblade's powers without falling under the control of Irons or being killed by those who desire to take the Witchblade themselves.

The series is something of a cult classic among viewers, and was released on DVD in 2008. General opinion has that the show was a reasonable translation of the comics and quite good in that regard. In fact, the show would have likely continued for several more seasons if not for lead actress Yancy Butler's substance abuse problems.

In January 2017, plans for a new version of the show were announced by NBC.