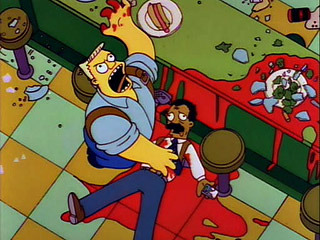 So you're watching a Buddy Cop Show. The Naïve Newcomer on the force has made his way to the precinct, ready to fight crime and turn this city on its head. According to the chief, he's about to be paired off with the grizzled old, potentially loose cannon of a cop. You see, the Grizzled Cop doesn't currently have a partner, and will protest having to take on the rookie because, as he will vehemently and adamantly bark at the chief, "I WORK ALONE!"

Cut back to Grizzled Cop's desk, and pan to a picture of him and another boy in blue, perhaps as Naive Newcomers themselves. Then pan over to the desk paired off with his, completely empty. This is the camera telling the viewer that, in fact, the cop used to have a partner, and now he's dead.

Another way is to have the Naïve Newcomer rookie accidentally sit down in the now vacant chair of the dead partner, and have the Grizzled Cop blow out on him about it.

Usually used as a form of Death by Origin Story, and frequently as a result of Grizzled Cop's loose-cannon ways. Compare Dead Sidekick. A sub-trope of Standard Cop Backstory.

As this is a Death Trope, all Spoilers will be unmarked ahead. Beware.