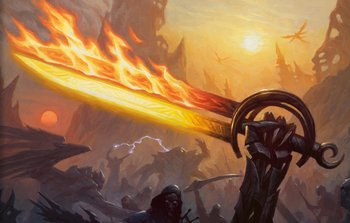 The Sword of War and Peace. Mostly war.
"Therefore the Lord God sent him forth from the Garden of Eden. He drove out the man; and He placed at the east of the Garden of Eden Cherubim, and a flaming sword which turned every way, to keep the way of the tree of life."
— Genesis 3:24, The Bible

This is what happens when you combine two of childhood's most reviled taboos...playing with sharp objects, and Playing with Fire.

Great-great-great Grandfather to the Laser Blade, this is a blade that is on fire (or possibly made of fire). These are usually wielded by divine and infernal Messengers alike, because nothing says "Gonna smite your ass" like being able to cut someone and burn them at the same time. Also a favorite trick of the Magic Knight, who may also vary it with different elements.

Sub-Trope to Elemental Weapon. Contrast Hot Blade, for when swords are warm enough to glow, but not to actually burn. A type of Impossibly Cool Weapon, for when your Cool Sword really needs that special touch. See also Incendiary Exponent, Fire-Breathing Weapon, and Oddly Shaped Sword (if the sword is flame-shaped). Don't expect it to ever be touched upon just how much Nightmare Fuel and Body Horror this should inflict on anybody on the receiving end. (Fire or a blade is bad enough.)

During the second part of their boss fight, the one revived as a Lord of Cinder has their greatsword set ablaze.

During the second part of their boss fight, the one revived as a Lord of Cinder has their greatsword set ablaze.