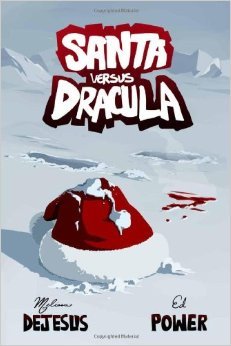 This time... It's Seasonal!

Santa versus Dracula is a comic book written by Ed Power and drawn by Melissa Dejesus (Both of My Cage fame).

Three days before Christmas Eve, Santa is getting ready for his yearly round when all of sudden the Easter Bunny is found battered and bruised outside his workshop, who in his dying breath warns him monsters are coming for him. Shortly after, Dracula calls Santa, informing him that he plans to take Santa's job since he can enter any house he wishes and, being a vampire, this would grant Dracula that ability. Naturally, Santa doesn't intend to give it to him willingly, despite an offer of surrender (and a quick death). What follows is bloody battle at the North Pole between Santa's forces and Dracula's monsters for the fate of Christmas.

The idea was actually conceived in 2009 and meant to be told as a webcomic but stopped beyond the opening story. In 2011, it was then seemingly set to be an animated adaptation that was submitted to Fox for their Aniboom segment, again only the first few parts of the story were shown before things went quiet again. Finally in 2012, the creators hosted a successful Kickstarter to get a book funded and in 2013, the full story was finally told in a graphic novel format.

The comic was hosted on Go Comics till the end of 2015, after which it was quickly taken off once it was finished. Though the graphic novel is still up for sale. You can view the animated trailer, here

Santa Versus Dracula has the following tropes