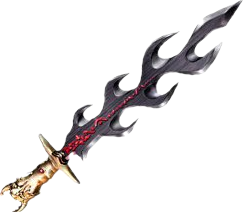 Useful to look cool, less to stab your opponent.note Although it's definitely going to hurt if you're able to do so and then pull the thing out
Advertisement:

Swords are cool. That's why heroes prefer them. But for some authors, it seems that a sword with a plain, straight blade, a curved katana or scimitar, or some other exotically functional real blade like the wavy kris

is still not quite cool enough. They need to invent their own special blade. So screw functionality and ergonomics! They will design swords with the weirdest shape possible, as long as it looks cool. The odd shape won't have any practical purpose other than looking special, when it isn't outright Awesome, but Impractical… not that it will prevent the wielder from fighting perfectly with it.

Usually the "odd" shape can either being used to give the character using the sword a distinctive character or can also be used for "humour" or alternative to a family friendly weapon: seeing such an odd sword makes you think that you can't possibly harm someone with that.

While the odd shapes for blades may vary. There's also one template that some strangely-shaped blades tend to draw inspiration from and it's the Nanatsusaya no Tachi/Shichishito, the legendary Seven-Branched Sword

. An ancient ceremonial sword, possibly originating in Korea, with three smaller blades on each side projecting from its main blade. It is one of the national treasures of Japan currently housed in the Isonokami Shrine in Nara Prefecture, Japan and not shown to the public.