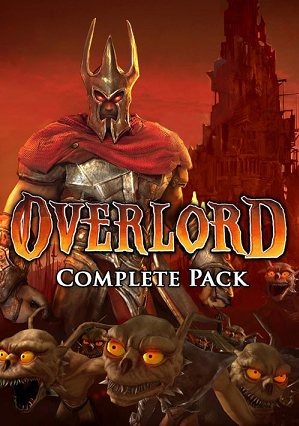 Overlord is a 2007 third-person Action-Adventure video game about, as its name implies, an Evil Overlord.
Advertisement:

You've just been awakened from your dark slumber by a handful of loyal minions, and find - to your chagrin - that when your predecessor fell to a group of do-gooder "heroes", they ransacked your Dark Tower, stole most of the magic objects, emptied the armoury AND treasury, and generally made a mess of things. Well, it's time to roll up your sleeves and get up to some serious evil! Rebuild your Dark Tower, recruit a fresh army of suicidally-loyal Minions, regain your magical powers, forge new equipment imbued with the lifeforce of mortals, terrorize the peasantry, slay the heroes that thus inconvenienced you, and CONQUER THE WORLD!

An expansion called Overlord: Raising Hell was released on February 15, 2008. Portals open up around the Overlord's conquered lands which lead to the "Abyss", a hell version of the normal world.