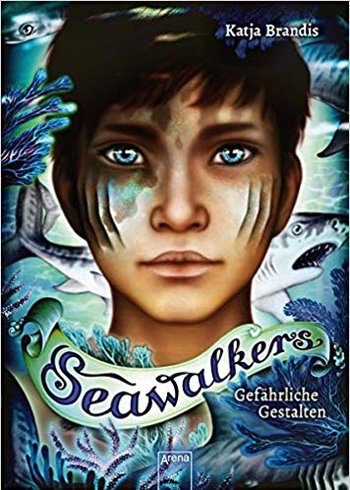 The German cover of the first book featuring Tiago
Tiago thinks he is a normal school boy living in the United States of America until he learns that he is actually a seawalker- a shapeshifter with the ability to turn into a water animal!

He now has to attend the Blue Reef High where he learns everything he needs for his life as a shapeshifter. But is life isn't as easy as he imagined: His classmates fear him because he can turn into a tiger shark and only a girl named Shari and his teacher Miss White seem to see past his second form.

Then he meets Carag who came to his school because he needs help with a task which was given to him by the headmaster of Blue Reef High- Jack Clearwater...

This series is the sequel to Woodwalkers but since the only thing linking those two series is the existence of shapeshifters and appearances of Carag Seawalkers is actually more then a spin-off which can be read without the knowledge of Woodwalkers.

The next book will be released in January 2021.