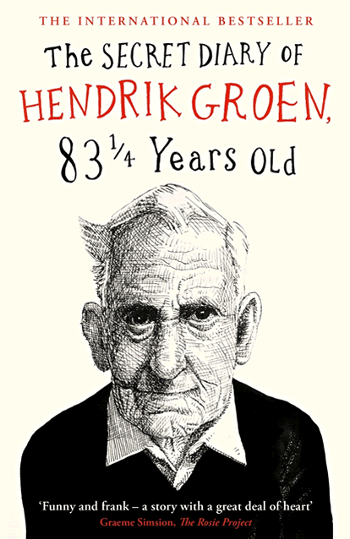 "You know, I'm going to Bruges, Belgium—not to Syria, so I'm unlikely to be beheaded. In fact there's about a million times higher chance of me just dropping dead of old age at any moment, and I don't need to go to Bruges for that—that might just happen right here right now."
—Hendrik, telling off a fellow resident who's bugging him about his upcoming trip

The books' and TV series premise is as follows: the protagonist is an eighty-plus-year-old man whose physical health is deteriorating and who's living in an "old people's home" in Amsterdam. The original book starts off at 1 January 2013 with his determination to write a diary daily, and the book is indeed written in a diary form. He documents everything that happens to him in 2013 in the first book. At the beginning of that year, he decides to establish a "club" (which he calls the "old-but-not-dead-club") of, in total, six elderly residents, with the purpose of them regularly going out "on adventures", to learn new hobbies, or to just have fun. The club doing so soon creates jealousy in the other residents, and the management of their nursing home soon starts to object to them doing this as well. Soon, Hendrik starts to turn all of this into a higher cause: he wants a better standard of living for the old inhabitants of the nursing home, in general.

The second book is another diary, that starts off at 1 January 2015 and documents Hendrik's life during that year.

As of late 2017, a TV series adaptation was released (currently only broadcasted in the Netherlands), which was slightly less comedic and more serious in tone than the books.

The author of the books is stated to be just "Hendrik Groen", which is the In-Universe name of the main character. Their Real Life identity is unknown. Who really wrote these books in Real Life is unknown. When the first book won the prestigious NS Publieksprijs (one of the biggest literary awards in the Netherlands), whomever the author was notoriously never showed up to collect the prize (a first, and it shows they really care about concealing their identity).

The books and TV series in general provide examples of:

The first book provides examples of:

The second book provides examples of: