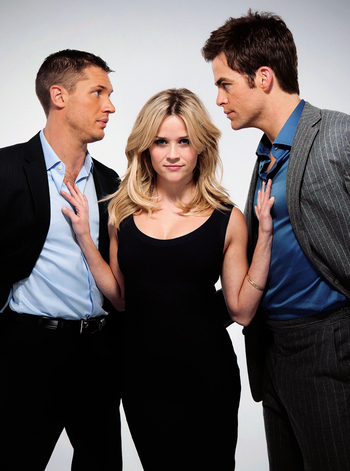 Love triangles are usually resolved in one of four main ways:

See Triang Relations for all the ways these three people can mess up their love lives.

Sometimes a Love Triangle can come to involve a fourth person, while still ultimately being called a "triangle." But more complications that result from widening it can be explored further in a Love Dodecahedron.

Expect anyone involved in the love triangle to become a Jealous Romantic Witness when they see their romantic rival and object of affection being intimate in one way or another.

This trope gets cranked up to eleven as a total of SIX people argue over who loves whom.

This trope gets cranked up to eleven as a total of SIX people argue over who loves whom.