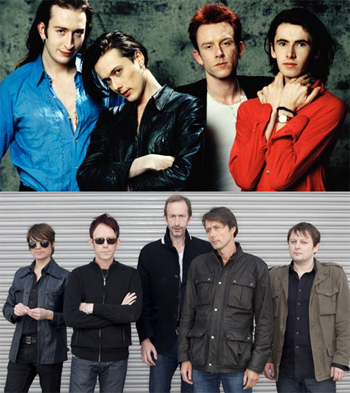 Suede (also known as The London Suede) are a British Alternative Rock band (Started 1989; went on breakup/hiatus between 2003-2010) known for being one of the bands to start Britpop, with a distinct glam rock style influenced by The Smiths and David Bowie. They gained press hype even before releasing their debut album, described by Melody Maker as "The Best New Band in Britain" as early as 1992. The following year, their debut album Suede, went to the top of the charts, becoming the fastest-selling debut album in almost a decade. Their next album, however, Dog Man Star, suffered in popularity due to a troubled production and Creative Differences between the band's lead singer, Brett Anderson, and guitarist Bernard Butler. This resulted in the departure of Butler and his replacement by Richard Oakes, a young fan of the band who got in thanks to a tape he recorded sent them of him playing some Suede songs (Drummer Simon Gilbert mistakenly believed it to be an early demo tape with Butler when he heard Anderson playing it back, going through audition tapes sent to them).

Their next album Coming Up became their largest success mainstream success, mainly in the UK, as in the US it was released a nearly year later and had only a short American tour. It was backed by the hit singles "Trash", "Saturday Night" and "Beautiful Ones". However, their following albums - Head Music and (especially) A New Morning - were met much less warmly, which led to the band's breakup in 2003.

In 2004, Anderson and Butler started a new group under the name The Tears, but broke up again after a single album, Here Come the Tears.

Maybe, maybe it's the tropes we wear...: