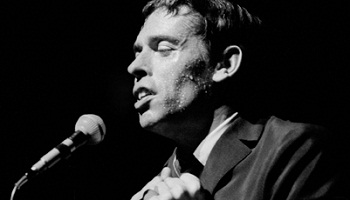 Together with Georges Brassens and Léo Ferré he is considered to be one of the Big Three of the Francophone music genre Chanson. He is widely admired for his deeply human, passionate but also cynical and satirical songs. Several of his songs have been become classics: "Ne Me Quitte Pas" and "Le Plat Pays" are his Signature Songs, but "Amsterdam", "Les Bourgeois", "Le Moribond", "Marieke", "Les Flamandes", "La Chanson de Jacky", "La Valse A Mille Temps", "Ces Gens-là"... are also well known.

Brel came from a Flemish bourgeoisie family. He had a dull youth in the shadow of the Catholic Church and narrow minded civilians. His early work was rather naive and preachy and in Paris people ridiculed his Belgian accent. Brel then changed his style by switching over to more mature subject matter and a standard French pronunciation. This made him a success both in his own country and soon in the entire world. Despite often referring to his fatherland Brel's music is both timeless and universal. He is the closest Belgium ever came to having a masterful lyricist of international stature à la Bob Dylan. His native French tongue made his songs a bit more difficult to understand for other languages, but luckily his work has been Covered Up by artists as varied as Frank Sinatra ("If You Go Away", a cover of "Ne Me Quitte Pas" on My Way), Nina Simone, Scott Walker and David Bowie. Most music fans in the English speaking world will known him from Terry Jacks' Translated Cover Version "Seasons in the Sun", which is a sentimental and ludicrously bowdlerised English cover of Brel's powerful "Le Moribond".

Brel was full of energy. The singer gave wild concerts where he performed each number with both passionate drama as exaggerated comedy. After the show he never went home straight away, but instead stayed up in the local bars until the early morning light. Even during plane flights to concerts, when he claimed to be relaxing, he used the time to write new songs! Brel abruptly quit giving concerts in 1966 and then switched to new challenges. He translated Man of La Mancha into French and starred in the French premiere of the musical, starred and directed in a few films (Les Risques du métier and L'aventure, c'est l'aventure, for example) and for the remainder of his life he travelled over the ocean to Tahiti. In 1977 he unexpectedly returned to Belgium to record one final album. A year later the chain smoker died at the age of only 49.

Despite his wide acclaim the singer is still frowned upon in certain circles. He frequently treated women, the Church, Flemings and the Bourgeoisie as Acceptable Targets.