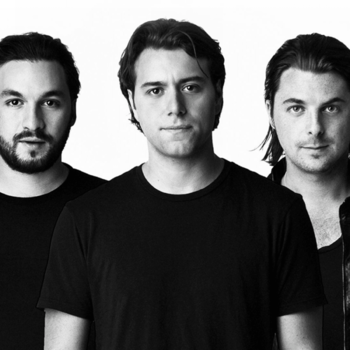 "We come, we rave, we love"
Advertisement:

Swedish House Mafia are an Electronic Music Supergroup that's Exactly What It Says on the Tin; i.e. a group of House Music producers from, well, Sweden. It was formed by three musicians: Axel "Axwell" Christofer Hedfors, Steve Angello, and Sebastian Ingrosso. Angello and Ingrosso were already friends, while Axwell was brought in to complete the trio. They had their beginnings in 2007 as a group of three relatively normal producers, releasing a few songs in collaboration with fellow producer Laidback Luke ("Get Dumb" and "Leave the World Behind") and touring together a bit. However, that all changed in 2010 when their song "One" became their Breakthrough Hit, reaching near the top of several European top 40 and dance charts (including #7 on the UK Singles Chart, #2 on the UK Dance Chart, #3 on Billboard's U.S. Hot Dance Club Songs, and #1 in the Netherlands), soon followed up by a documentary on their beginnings, and several other songs (including a collaboration with Knife Party and their epic anthem "Save the World".

But what contributed to their ascension as the Ensemble Dark Horse of progressive and electro house? They marketed themselves as heavily as the average rock band, and they took their live shows Up to Eleven with an elaborate stage presence and visual effects, and full-on arena shows. They went practically everywhere, especially at a time when names like David Guetta and Skrillex were becoming household names. Plus, they even managed to sell out Madison Square Garden in ten minutes flat.

The group announced in June 2012 that they would be disbanding at the conclusion of their final world tour, aptly titled "One Last Tour", to focus more on their (now much more prominent) solo careers (some also attribute this to a violent incident at one of their concerts in Ireland some time before. Their second documentary, Leave the World Behind, goes into a bit more detail, but not quite). Their journey came to an end on March 24, 2013, when the group performed for the last time as the Grand Finale of the Ultra Music Festival in Miami.

The three members are still active on an individual basis; all three of them run their own EDM record labels (Axtone, Refune, and Size), and have continued to release new solo material and make live appearances (a reunion was subverted just a few months later at Tomorrowland, where all three members did seperate main stage sets on each night). But, clearly, Axwell and Ingrosso still wanted to work together: they contributed a song to the Monsters University soundtrack, did a residence at a club in Ibiza over the summer of 2013 entitled Departures, and then announced in 2014 that they would do a joint tour and album as a duo named "Axwell Λ Ingrosso".

To many people's surprise, the group reunited to perform at the 2018 Ultra Music Festival in Miami. At this show, Axwell strongly hinted that it wasn't merely a one-time-only comeback. In fact, the trio resurfaced back in 2021 with three new singles - "It Gets Better", "Lifetime" and "Moth To A Flame" - as a lead-up to their upcoming new album Paradise Again. They have also branched out and lent production to other artists, most notably The Weeknd for Dawn FM.

This group provided examples of