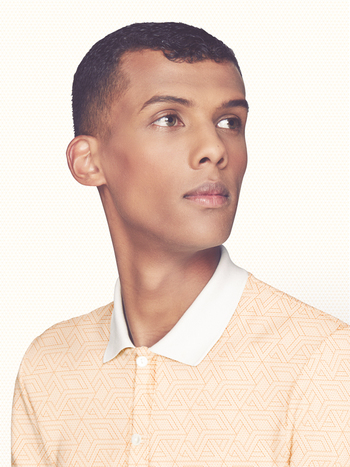 Paul van Haver (born 12 March 1985), better known by his stage name Stromae, is Belgian rapper, singer, dancer, and songwriter. Born to a Rwandan father and Belgian mother, he has managed to establish himself in the hip hop and electronic music genres.

He first emerged in the music scene in 2009 with his single, "Alors on danse", which became a number one hit in several European countries. His second album, Racine Carrée, was released in 2013 and became a huge commercial success. He is best known for songs such as "Papaoutai", "Ta fête", "Tous les mêmes", "Alors on danse", "Ave Cesaria", "Formidable", and "Quand c'est?". With his song "Carmen", he also gained new popularity in America.

With the end of the racine carrée tour and the release of the "Quand c'est ?" video in 2015, Stromae went on a hiatus to focus on other projects and to recovering from health problems and burnout. The hiatus was declared over by the fandom in 2018, when Stromae featured on Orelsan's "La pluie" and appeared in the accompanying music video. Stromae also released the single "Défiler" in April 2018 as the soundtrack to Mosaert'snote the record and fashion label Paul cofounded first fashion show. In an interview three days after the release of "Défiler"

, Paul said he is starting to accumulate enough new material for a third album.

This page is still a work in progress and needs some serious love.

Tropes that apply to Stromae and his music: