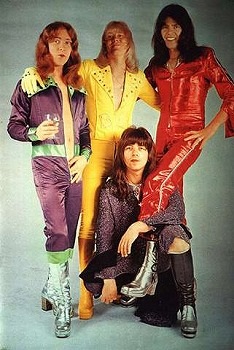 One of the most popular Glam Rock groups of The '70s, and one of the few to cross the Pond and achieve success in the United States,

Originally called Sweetshop (they shortened their name to avoid confusion with a similarly-named band), the group quickly developed a devoted following and acquired a recording contract that partnered them with the then-unknown songwriting/production team of Mike Chapman and Nicky Chinn, who ended up composing most of the group's most memorable hits.

Further hits followed, but the band eventually grew tired of the Executive Meddling imposed upon them and parted ways with Chapman and Chinn. Although singles like "Action", "Fox On the Run" and "Love Is Like Oxygen" proved that they could score hits with their own songwriting, they were unable to sustain their success after Brian Connolly decided to call it quits in 1978, and they disintegrated soon after.

Although they're probably less well-remembered than contemporaries such as T. Rex and Slade, they're noteworthy as one of the first rock and roll groups to combine the melodic and commercial components of pop with their hard rocking glam attack. In essence, Sweet was the first Hair Metal band, prefiguring that style by nearly a decade.

"I'm reaching out for something, troping nothing's all I ever do":