Music / In the Wee Small Hours 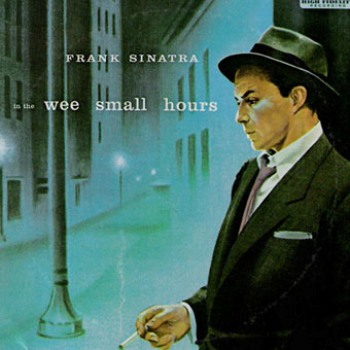 "In the wee small hours of the morning / While the whole wide world is fast asleep / You lie awake and think about the girl / And never, ever think of counting sheep."
"I'm a Sinatra nut. I went to bed every night listening to In the Wee Small Hours."
—B.B. King, in his autobiography.
"Actually, the very first 'concept' album. The idea being you put this record on after dinner and by the last song you are exactly where you want to be. Sinatra said that he's certain most baby boomers were conceived with this as the soundtrack."
—Tom Waits, who in 2005 put In the Wee Small Hours in the number 1 spot of his 20 personal favorite albums.
Advertisement:

In the Wee Small Hours is the ninth studio album by Frank Sinatra, released in 1955. It was recorded when the singer went through marital troubles with his second wife, Ava Gardner, which would eventually lead to their divorce two years later. This mood of melancholic loneliness over failed relationships was reflected in the central theme of all the songs, making the record an early example of a Concept Album, virtually a whole decade before rock artists such as Frank Zappa note on Freak Out from 1966, The Beach Boys note on Pet Sounds from 1966. Though some argue Little Deuce Coupe from 1963 is an early concept album and The Beatles note on Sgt. Pepper's Lonely Hearts Club Band from 1967 would make the genre popular; the only older example is Woody Guthrie's Dust Bowl Ballads from 1940, and even that is debatable (In the Wee Small Hours is unified by theme and mood in a way that the narrative-oriented Dust Bowl Ballads is not). In many ways it's considered the Ur-Example of the modern idea of a music album, both because of its use of a central concept and because of its popularization of the 12" long-playing record as the format for albums prior to the advent of the Compact Disc (previously they were literal album books filled with 78 rpm records).

The album was a success from the start that effectively revived his slumping career. It transformed him from the teen idol he was before into an artist that deserved to be taken seriously and who dealt with more mature themes.

Nelson Riddle once again provides the arrangements and conducts the orchestra. This was the first album to showcase Riddle's own arranging style: of his previous efforts with Sinatra, Songs for Young Lovers mostly used George Siravo arrangements and Swing Easy! was orchestrated by Riddle in a style reminiscent of Red Norvo.