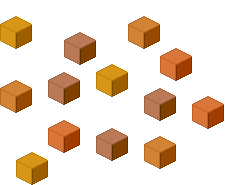 Just a bunch of randomly placed cubes. No grid here. Move along.
A set of spatial constraints, not visible to the player, determines the actions taken by a character in certain contexts. It is most common in 3D Platformers, but is on the decline. Essentially, it marks where each jump will land and where the next climbable branch is, therefore automating the platform jumping mechanic.
Advertisement:

While this takes much of the guesswork out of the process, and therefore allows the player to move quickly without aiming his jumps, it also creates artificial restrictions on the player's actions. One major feature of a game with an Invisible Grid is the lack of an ability to steer in the air.

Games which make continual use of the Invisible Grid, not only for jumping but for walking as well, are often said to be "On Rails", as if the game was played from a railcar. This style of play is common for Light Gun Games and for Adventure Games using a first person view with prerendered scenery. It is uncommon in other genres.