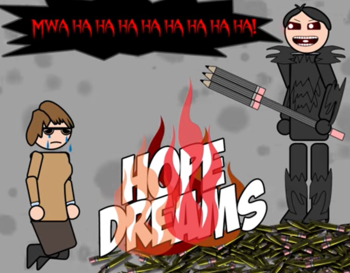 "If I am being honest, I care only to give hope to the frightened, huddled masses so that when I come upon them they will have more to lose. Their pain will be greater. Their screams more pure. (...) Nothing dies like hope. I cherish it."
— Dredgen Yor, Destiny
Advertisement:

We know that the Despair Event Horizon is a line that one loses all hope upon crossing. The crosser may remain a good person, or the crosser may turn evil.

The Hope Crusher is someone who enjoys pushing people toward and over that line.

Hope Crushers love the sense of despair. When other people lose hope, they take pleasure in it. It's not necessary for them to be the one to push them into despair (although they often are); however, they cherish the feelings of despair of many people around them, especially when directed at them. They might not be Emotion Eaters, but they sure feel good when people around them despair. Since the sense of despair is something people usually try to avoid at all cost, liking despair so much and inflicting it on others are a good indication for the audience that this character is evil incarnate.

They will be very fond of the Despair Gambit. They will often give a Hope Spot to their victims, and then yank it away at the last second, mostly thinking that despair is at its finest when the last ray of hope is destroyed right in front of their eyes. If they would instill Hope Is Scary, so much the merrier! Don't expect them to enjoy their own despair, though. Most of the time.

Their goals are more likely to be For the Evulz (this is often seen in the Generic Doomsday Villain) though this isn't always the case.

A popular non-For the Evulz explanation for these sorts of characters is an inability to experience positive emotions themselves coupled with a jealousy for other people's happiness and wanting these people to be just as miserable as they themselves are. There are also some villains that believe that despair is necessary, and don't seek pleasure in destroying hopes and dreams, but do so because they believe that they have to.

Note: targeting just one specific person to make them miserable doesn't make a character a Hope Crusher, to be this trope the character has to have a desire to make everyone around him or her miserable or have a specific plan in effect to make large groups of people miserable for that purpose alone.

Contrast with Hope Bringer, who is likely to be the natural enemy of this kind of villain. Has occasional overlap with the Sadist, as sadists delight in other people's pain and suffering and seek to cause it by any way possible, and people suffer the worst when they are driven to despair. Can also overlap with those who believe that Dystopia Justifies the Means. Sometimes overlaps with darker Trolls if they specifically aim to destroy others' happiness. They may also be an Intentional Heartbreaker.