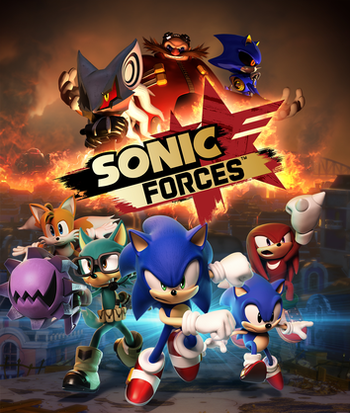 Join the uprising.
"The war to take back the planet begins... Now."
— Knuckles the Echidna
Advertisement:

Sonic Forces is a 3D Sonic the Hedgehog title, released on November 7th, 2017 in the North America and Europe and November 9th, 2017 in Japan for the PlayStation 4, Xbox One, Nintendo Switch, and PC. It is the second half of the franchise's 25th anniversary celebration (the other half being Sonic Mania).

After discovering the mysterious Phantom Ruby, Mad Scientist Dr. Eggman has gotten the closest he's ever been to a complete victory, as he has created a new threat known as "Infinite" and used him to defeat and capture Sonic and take over 99.9% of the planet in mere months. Despite Knuckles the Echidna leading the Resistance against Eggman, the scientist is very close to conquering the entire world. To that end, the only hope of saving the world lies in not only rescuing Sonic himself, but the aid of a second Sonic...

...and you, a rookie Resistance member.

While it was initially said to not be a sequel to Sonic Generations, it does take one concept from the earlier anniversary title — the return of Classic Sonic, joining his modern counterpart to counter a threat larger than anything they've faced before.

The gameplay of Forces is divided into 4 distinct styles, split between each of the three playable characters:

In addition to the base game, there's free Downloadable Content in the form of Episode Shadow, in which the player controls Shadow the Hedgehog through three remixed stages in a story mode set before the main plot, as well as having him playable in Modern Sonic's stages from the main game itself. There are also a series of four digital comics that flesh out the game's story.

The teaser trailer debuted at an event in late July 2016 and can be found here.

The E3 trailer is shown here

. The Launch Trailer is found here

A spinoff app called Sonic Forces: Speed Battle was soft-launched for the iOS in September 11th, 2017 and was eventually also released for Android devices some time afterwards in several countries with the world-wide release launched on November 16th, 2017. It's a track runner with a concept similar to Sonic Dash, where you race against your allies (and villains) around different parts of the world to collect "Phantom Ruby Prototype" fragments.

Forces was the last mainline game involving writers Ken Pontac and Warren Graff, who retired from the series after Team Sonic Racing. They worked in the game as part of the localization script, with the original Japanese script being written by Makoto Goya. Episode Shadow was instead helmed by longtime Sonic Team employee Eitaro Toyoda, the Sonic series' character supervisor from Free Riders onward, and the writer and artist behind the 2015-16 Sonic Comic.

All alone, we will never be
The two of us, are holding the key
We see today, a world we couldn't see
Before I say goodbye to you
One more last fist bump…
Feedback