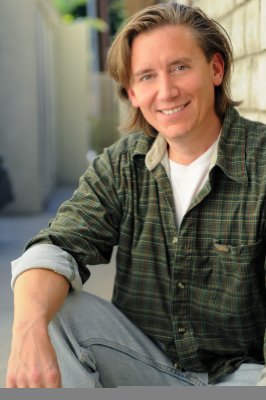 Originally from Houston, Texas, he's probably the poster guy for Pigeonholed Voice Actor. He's never been able to live it down, and up until 2009 had been voicing pretty much Shinji in a different form. We're looking at you, Hanataro (less emo, more timid) and Rolo (more emo, less timid, and psychotic).

However, that all changed when he was cast as the psychotic Arakune. This came as a shocking surprise to fans, and has finally broken him out of the pigeonhole. These days he's cast in all kinds of roles, though hilariously he's gravitating a bit more to suave, ladies-man-esque or wise person roles (due to his voice getting a bit deeper as he ages).

Noted for being an extremely funny guy who is very welcoming to his fans. He once referred to Sam Riegel as ""the gay man with the fan

". He's also a black belt (which makes him wonder why he's cast as the helpless kid). He also hates Hideaki Anno for running out of ink

to finish NGE, that bastard!

And remember, it's not a true Spike Spencer role without a good old-fashioned Freak Out. Incidentally, this scene

(starting at 2:03) (major Evangelion spoilers) is the only one he's specifically described as having made him uncomfortable to work on. He was formerly married to Kendra Benham, the first voice actor of Maya Ibuki. He's since remarried to Kim MacKenzie.

Also, he once placed a grenade in the Nostalgia Critic's pants.

Not to be confused with Spike Spiegel, a character from a show he wasn't in.

Spike Spencer and his works provide examples of: