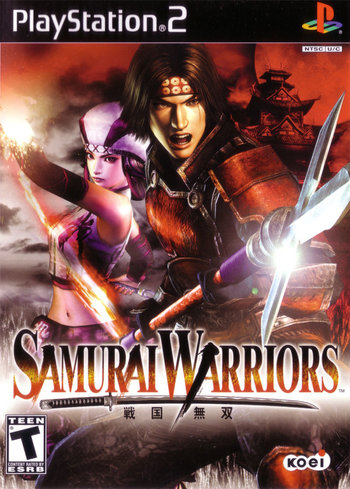 Enjoy the ultimate battle for supremacy in the Warring States Era!
Advertisement:

Samurai Warriors started as a spinoff of Koei's Dynasty Warriors Hack and Slash series, porting the gameplay elements to a new setting: the Sengoku Period of Japanese history.note Hence its Japanese name "Sengoku Musou," compared to Dynasty Warriors being "Shin Sangoku Musou." Its success has lead to it becoming its own series, with a total of 5 main installments, all with their own offshoots and expansions. The playable scenarios span fifty years of Japanese history, and playable characters include Nobunaga Oda, Ieyasu Tokugawa, Hideyoshi Toyotomi, Yukimura Sanada, Mitsunari Ishida, Musashi Miyamoto, Hanzo Hattori, Kotaro Fuma, and many more. It should be worth noting that each version loosely sticks to a certain time frame and focuses on specific moments: case in point, the first game is all over Nobunaga while the second game's primary focus are the events leading to Sekigahara, while the third appears to try to cover just about everything in-between with a loose increased focus in the Pre-Nobunaga Warlordsnote Kenshin Uesugi, Shingen Takeda, with the introduction of daimyos Motonari Mori and Ujiyasu Hojo. The Fourth Game abandons the personal story modes and alternate histories, with a a hard focus on Drama and making sure each major clan has it's own story mode. The Chronicles games covers a whole lot, while the Spirit of Sanada Spin-off focuses on the Sanada Clan, from their early days as a Takeda Vassal, to Yukimura Sanada's famed Last Stand in Osaka Castle. The fifth game is a reboot, focusing fully on Nobunaga, but unlike the first game, the focuses on the plot is laser-focused, lacking famous-yet-then-irrelevant characters like Yukimura Sanada and Masamune Date.

Some of the playable battles:

and many, many more

Some scenarios are Alternate History tales, such as Nobunaga surviving Honnoji and uniting Japan, or Hideyoshi faking his death in 1598 and appearing at Sekigahara (both examples are their respective hidden "Dream Stage" battle). In other cases, some of the "Dream Stages" are just for fun, like Tadakatsu taking on all worthy warriors in a champion's tournament or Nohime and Oichi's beauty contest battle (made even funnier if played with the SW2: Xtreme Legends expansion).

It has an anime adaptation produced by TYO Animations which is adapted from Samurai Warriors 4-II and only focuses on Hideyoshi's later stages of conquest (the 2nd siege of Odawara) until the Siege of Osaka. It was part of the Winter 2015 Anime lineup. Funimation has licensed the series for North American distribution.

This franchise features the following tropes: