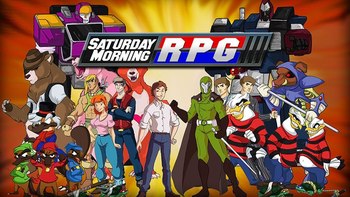 Saturday Morning RPG is an episodic RPG set in a world heavily inspired by 1980s Saturday morning cartoons and pop culture, with a soundtrack by Vince DiCola (The Transformers: The Movie, Rocky IV) and Kenny Meriedeth. It was developed by Mighty Rabbit Studios, and published by Actigame Publishing Corp. After an initial release on iOS in 2012, it was subsequently ported to Android, Steam, PlayStation 4, and PlayStation Vita (the latter two as limited-edition physical copies), with a Nintendo Switch version released in 2018.

The game stars Marty, a teenage boy living in the town of Shadow Valley. Marty is pretty much every teenage kid protagonist from every 80s movie. The awkward, shy, kinda nerdy kid crushing in a girl who's dating the guy who seems to have been put on this Earth just to make him suffer, with nothing really going for him.

One night, however, he has a dream. In this dream, the girl of Marty's dreams is being wed to Commander Hood, the villainous leader of the powerful terrorist organization "H.O.O.D.". He tries to fight Commander Hood, but is given a beat down by Hood's forces. Then, Marty is approached by the Wizard, a really cool dude who gives him a notebook of power full of scratch and sniff stickers and various other items that grant him amazing powers. After his dream, he wakes up and discovers the notebook of power in bed with him, much to his surprise. That is but the beginning of the greatest adventure of Marty's life.