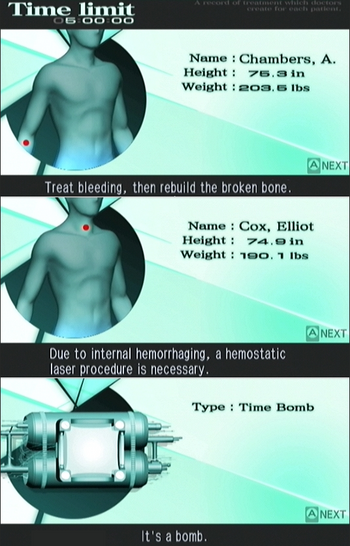 If you don't treat this patient, you won't make it.
"Due to mandatory scheduled maintenance, the appropriate chamber for this testing sequence is currently unavailable. It has been replaced with a live-fire course designed for military androids. The Enrichment Center apologizes for the inconvenience and wishes you the best of luck."
— GLaDOS, Portal
Advertisement:

You've been ruthlessly blasting through enemies with a machine gun for the past several hours, but suddenly your weapons are confiscated, and you're now forced to maneuver your way through the rest of the level stealthily while remaining in the shadows. Or you're playing a platforming game and you're forced to enter a dirtbike race in order to acquire a Plot Coupon. Maybe you're playing a horror game where you need to hide to survive, and the protagonist suddenly hauls off and punches the monster in the face.

Such changes can add welcome variety to gameplay, but sometimes these (usually brief) segments are poorly implemented and only serve to disrupt the otherwise genial flow of the game. They hurt somewhat less when they're presented as genuine mini-games that you can practice or skip at your own discretion, such as in a Wide-Open Sandbox, but heaven forbid if they're required for 100% Completion, or, worse, part of the main game. In this case they may become That One Level.

This can often be a form of Fake Difficulty, and is occasionally a cause of Disappointing Last Level.

If used too much, it becomes Gameplay Roulette.

Expository Gameplay Limitation is broadly related, and refers to instances where the gameplay is subtly altered and restricted to focus the player's attention on exposition.

For an Expected Gameplay Change, see Bonus Stage. When this happens to the plot of a game (or any other media) it's a Halfway Plot Switch, Genre Shift, or Out-of-Genre Experience.