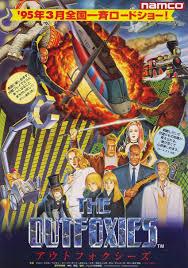 "Kill your enemy by any means!"
Advertisement:

The Outfoxies is an arcade video game that came out in 1995 made by Namco. It stars 7 hitmen who have been hired by a mysterious client known as Mr. Acme to kill 7 art collectors. Unknown to the other 7 characters, Mr. Acme decides to have them fight each other to the death so he doesn't have to actually pay them.

While not very well known at the time of its release, it's notable for its unique style of gameplay, which basically plays a lot like Rolling Thunder if you turned it into a Fighting Game of sorts. The areas consist of big arenas which are basically destructible environments. Not only that, there's a variety of weapons for each of the characters to use in the levels, as well as using the environment to their advantage to kill their enemies. It's basically seen by many as a Spiritual Predecessor to the Super Smash Bros. series; Masahiro Sakurai himself has pointed to this game as one of the inspirations for Smash.