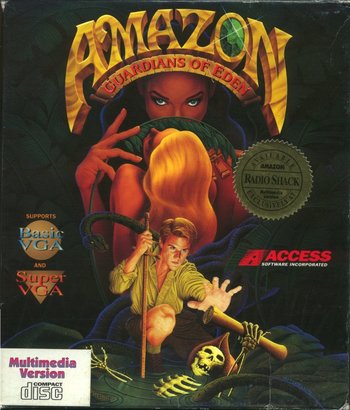 Amazon: Guardians of Eden is an adventure video game for DOS by Access Software released in 1992. In it, you play as Jason Roberts, a researcher. His brother, Allen Roberts, has gone missing in an expedition to Amazon. After reading the secret code from him using a decoder ring, Jason sets off to rescue him from "forces who will stop at nothing to get the information he has". Along the way, our hero meets Maya, a woman who seems to be more than meets the eye...

The game uses simple point-and-click controls with Look, Move, Take, Items, Climb, Talk, Exit icons. Movement is done with the arrow keys. There are points where you switch control between Jason and Maya, or when you have to canoe down the river. This is also one of the first games to support SVGA, beating even Leisure Suit Larry 6: Shape Up or Slip Out!, Sierra's first SVGA adventure game.