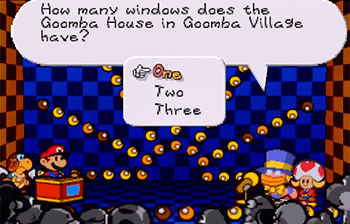 Kaaaa-wiiiizzz!The answer The answer is one. If you got it right, have a Star Piece!
"A quiz?" Peach questioned bluntly. "Really? A quiz?"
"A quiz!" exclaimed Amy.
Silence.
"…it's not the same without Zelda."
— Super Paper Mario X, Chapter 14
Advertisement:

The tendency of some video games to suddenly spring a general knowledge quiz on you regarding relatively obscure facts about the events, characters and monsters in the game universe. They are always multiple choice and usually timed. Sometimes these questions are simply impossible to answer because the game has never given you the relevant information, forcing you to take a wild guess. The most insidious versions of these quizzes randomize the questions so you can't just reach the end through trial-and-error. Unfortunately, these quizzes are usually essential to get a 100% Completion. Can take the form of a Game Show or Fairy Battle, and also be a Deadly Game. Pop quizzes can also be a form of anti-piracy, usually with the answer in the manual or included in Feelies