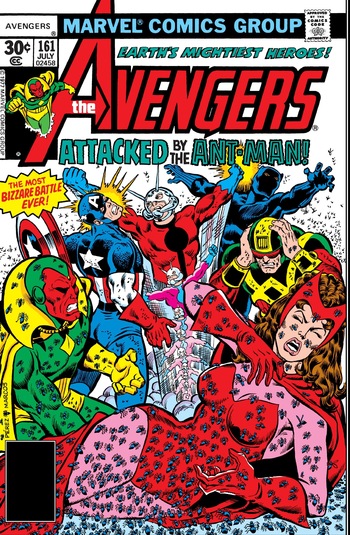 Not even superheroes are immune to ants.
Oh we're the ants who ruin your dinner.
We're always here to mess up any day.
When we're around, every camper gets thinner.
'Cause if we get the chance,
we will taaaaake, your food away.
—The Ants, Garfield and Friends, "The Picnic Panic"
Advertisement:

Among humans, ants are often known as the source of trouble. They are common pests, showing up whenever there is food to be found and appearing uninvited in the hapless person's house or picnic in large numbers. Some ant species build their nests inside the walls and foundations, damaging their structure. And lastly, ants, much like bees and wasps, can sting. Depending on species, these stings may hurt a lot, especially when they sting en masse, with fire ant

stings being the most infamous.

Combined with the stereotype that ants can carry stuff much larger than them with ease, it's no surprise that ants featured in fiction end up being the source of trouble. More often than not, they will be portrayed as an aggressive swarm focused solely on expanding their colony or protecting it from intruders at any cost. They may also show up as food thieves, with a particular penchant for stealing food from picnics. In more anthropomorphic settings, you may expect to see them as militaristic expansionists. Sometimes, they may come in massive sizes. Either way, there ants exist solely to cause trouble.

For obvious reasons, this trope frequently overlaps with Strong Ants. May often be featured as one of the sides in the Ant War. Compare with Termite Trouble and Wicked Wasps.