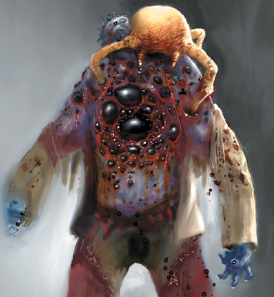 The Parasite Zombie is a subtrope of the Plague Zombie and of Parasitic Horror. These zombies are created specifically via exposure to a form of parasitic lifeform, be it the only stage or part of a series of life stages. Good for video games, as the advanced forms allow for advanced enemies and bosses to still be zombies. Also can be used to justify why the heroes are miraculously uninfected: It's generally easy to avoid the parasites that cause this type, once you know what they are.

See also Puppeteer Parasite, for when it's a living creature being controlled by a parasite rather than a corpse.

Any human who eats any of the mold is turned into a walking husk.

Any human who eats any of the mold is turned into a walking husk.