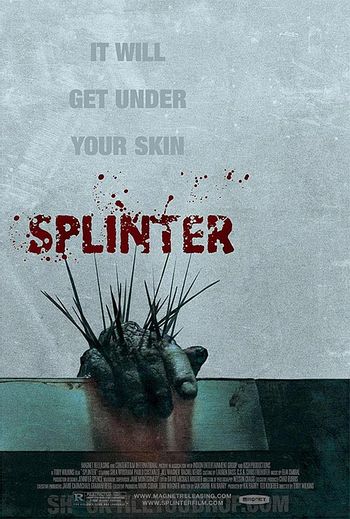 Splinter is a 2008 horror film directed by Toby Wilkins.

The film opens with a gas station attendant out in the woods being attacked by what appears to be a rabid animal. It then cuts to a couple; Seth Belzer (Paulo Costanzo) and Polly Watt (Jill Wagner); attempting to go on a camping trip, but upon failing to erect the tent, deciding to go to a motel instead. As they drive, they are pulled over by escaped convict Dennis Farell (Shea Whigham) and his junkie girlfriend Lacey Belisle (Rachel Kerbs), whom are eloping to flee to Mexico. The two hijack their car and take the couple hostage.

As night falls and the four continue on, they hit an animal. Investigating the damage, Dennis gets a splinter in his finger. Seth and Lacey, meanwhile, discover that the animal they hit is covered in black spikes. When the carcass suddenly convulses, they flee. Stopping at the aforementioned gas station, Lacey goes to use the bathroom. There, she discovers the body of the attendant, covered in the same black spikes. The body suddenly comes alive, attacks and kills her.

Seth, Polly and Dennis take refuge inside the station. Observing an animate severed hand that manages to slip inside, Seth, a biology student, determines they are under attack by a parasitic organism. The organism, manifesting as the black spikes, takes over the bodies of the animals or people it kills and uses them for locomotion. It can also use severed limbs such as the hand for this purpose. Furthermore, one piece infected with it can connect itself via the spikes to another piece (for example, an infected severed pair of legs can connect itself to the severed torso of a different person).

The three must find away to keep safe from the organism, as well as defeat it. But Dennis, due to the splinter he got earlier, has already been infected himself...

Not to be confused with the 2006 film of the same title.